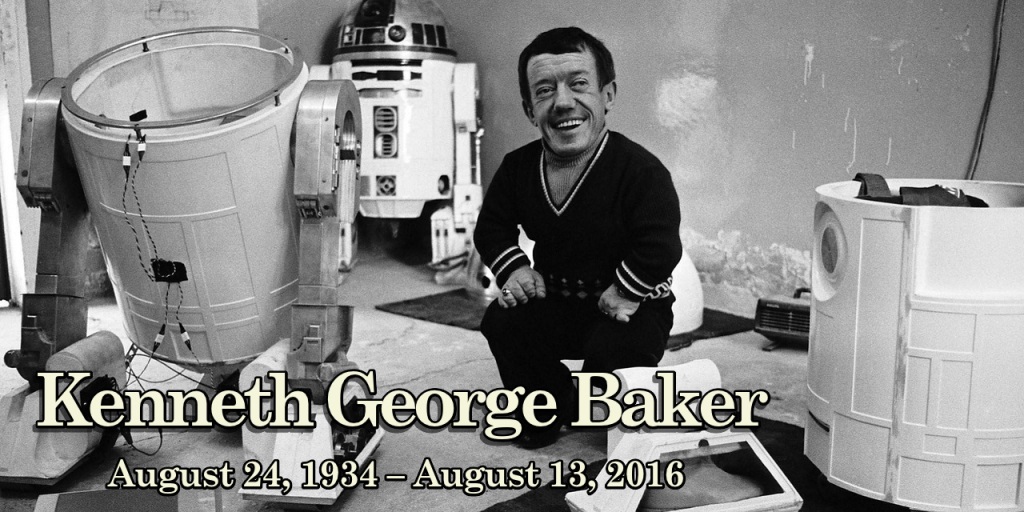 The Star Wars franchise has come back in a big way over the past year, with Star Wars: The Force Awakens proving to be a big hit and a whole slate of exciting new movies to look forward to. Today, however, Star Wars fans must say a sad farewell to a performer who has been a part of the franchise since A New Hope hit theaters in 1977. Kenny Baker, who played Luke Skywalker’s android friend R2-D2 in the Star Warsmovies, and also had a small role as an Ewok in Return of the Jedi, has passed away at the age of 81, following a long illness.

Baker was born in Birmingham on August 24, 1934. He was born with a form of dwarfism, and as an adult stood at just 3ft 8in tall, making him the ideal height to be the man inside R2-D2. After Star Wars kicked off his film career, Baker went on to make appearances in Flash Gordon, The Elephant Man, and Time Bandits, as well as numerous other movies and TV shows. In 1970 he married fellow actor Eileen Baker, with whom he had two children, and the couple remained together until Eileen died of epilepsy in 1993.

Baker’s niece Abigail Shield paid tribute to her uncle in a statement to The Guardian, explaining that Baker had been “very poorly for a long time”:

“It was expected, but it’s sad nonetheless. He had a very long and fulfilled life. He brought lots of happiness to people and we’ll be celebrating the fact that he was well loved throughout the world. We’re all very proud of what he achieved in his lifetime… When he was a child, he was told that he probably wouldn’t survive through puberty, being a little person in those times, they didn’t have a very good life expectancy. He did extremely well in his life.”

Baker was very active on the convention circuit over the years, meeting many fans face-to-face for autographs and photos. Shield says that he was invited to the L.A. premiere of Star Wars: The Force Awakens, but was unable to make it since he was too ill to travel. However, he was able to reconnect with Star Wars director George Lucas when Lucas made a trip to Manchester following the UK premiere. R2-D2 is a much-loved and long-standing member of the Star Wars family, and Baker is sure to be fondly remembered.

Reblogged and updated from my other blog All That I Love – post published for Kenny Baker’s 79th anniversary.

Kenneth George “Kenny” Baker (born 24 August 1934) is an English actor and musician, best known as the man inside R2-D2 in the popular Star Wars film series.

Kenny Baker, at 3 feet, 8 inches (112 cm) tall, was born and educated in Birmingham, Warwickshire, and at boarding school in Kent. His parents were of average height. He went to live with his father, stepmother and half sister in Hastings, Sussex, and in 1951 was approached on the street by a lady who invited him to join a theatrical troupe of dwarves and midgets. This was his first taste of show business. Later, he joined a circus for a brief time, learned to ice skate and appeared in many ice shows.

He had formed a successful comedy act called the “Minitones” with entertainer Jack Purvis when George Lucas hired him to be the man inside R2-D2 in Star Wars in 1976. Baker appears in all six of the Star Wars films, although stock footage was used for much of R2-D2’s role in “Revenge of the Sith”. Kenny even played an additional role in 1983’s “Return of the Jedi” as Paploo, the Ewok who stole an Imperial speeder bike. He was originally going to play Wicket W. Warrick, but he fell ill, and that role was handed over to Warwick Davis.

Baker has also worked with George Lucas outside of the Star Wars films. Baker had an uncredited role as R2-D2 in “Star Tours” and an uncredited role as a Nelwyn band member in “Willow” (also with Jack Purvis and Warwick Davis), as well as a role as the Goblin Corps in the 1986 Jim Henson film “Labyrinth”. Baker’s other films include 1980’s “The Elephant Man”, 1981’s “Time Bandits” (also with Jack Purvis), “Flash Gordon”, and “Amadeus”. On television, he appeared in the British medical drama “Casualty”. He also had a part in the BBC production of “The Chronicles of Narnia”.

In November 2009, his biography entitled “From Tiny Acorns: The Kenny Baker Story” was made available through his website and at conventions and book signings. It was written with Ken Mills. Baker continued his association with the character of R2-D2 in “Star Wars: The Force Awakens”, which was released on December 18, 2015 in North America. He was going to be a member of the cast, but he served as consultant for R2 instead. In November 2015 it was confirmed that Jimmy Vee was cast as R2-D2 in “Star Wars: Episode VIII”, replacing Baker.

Baker resided in Preston, Lancashire. He was married to actress Eileen Baker (who co-starred with him in the 1977 film “Wombling Free”) from 1970 until her death in 1993. Although Eileen also had dwarfism, this was not inherited by their two children.