Source: The Hollywood Reporter and ScreenRant

Though Star Wars Rebels executive producer Dave Filoni and Lucasfilm’s Pablo Hidalgo are both customarily tight-lipped when it comes to the secrets of the Star Wars universe, they did find it in their hearts to provide a couple of fun reveals Thursday at their Animated Origins and Unexpected Fates panel at Star Wars Celebration 2017 in Orlando.

Captain Rex in Return of the Jedi

To start with — with very little fanfare, which is customary for both of these cheeky Star Wars masterminds — they casually threw up onscreen a piece of concept art from the upcoming season of Star Wars Rebels. In it was featured the character of Rex, but instead of being dressed in his customary Clone Trooper armor, he sported a green and tan camouflage jacket — garb that was undeniably similar to that worn by the Rebel strike force that destroyed the Empire’s shield generator in Return of the Jedi.

And though this may’ve seem inconsequential, it actually confirmed what had long been a fan-favorite rumor: The white-bearded Rebel that helped to defeat the Empire on Endor was in fact Rex the Clone Trooper.

Filoni and Hidalgo then went on to introduce an unfinished scene from their canceled-too-soon TV show, Star Wars: The Clone Wars. Even as the animation remained rough and incomplete, the scene itself still carried in it an exciting reveal.

How did Boba Fett’s helmet get that iconic dent?

The deleted scene from Star Wars: The Clone Wars reveals how Boba Fett’s helmet was damaged, solving this particular mystery. Even a novice Star Wars fan is aware of the legend of Boba Fett, the character who started out as little more than a background player in the events of the Original Trilogy, whose design and overall vibe led to him becoming a fan-favorite character.

Dave Filoni and Pablo Hidalgo, the duo revealed an unfinished scene featuring Boba Fett and none other than the villainous Cad Bane from The Clone Wars series. While the actual clip has not yet been officially released online, the scene began with Fett having a confrontation with Bane, after the latter had captured some of Fett’s friends. With no peaceful way to resolve the situation, the two bounty hunters engage in a The Good, the Bad, and The Ugly-style standoff that would make Sergio Leone proud, with both Fett and Bane circling each other, blasters at their hip.

Suddenly, the two combatants both draw their weapons at the same time, firing and blasting each other backward. While Filoni and Hidalgo declined to reveal the fate of Bane at the end of the confrontation, the clip did very clearly reveal that it was Cad Bane responsible for the infamous dent near the top of Boba Fett’s helmet. 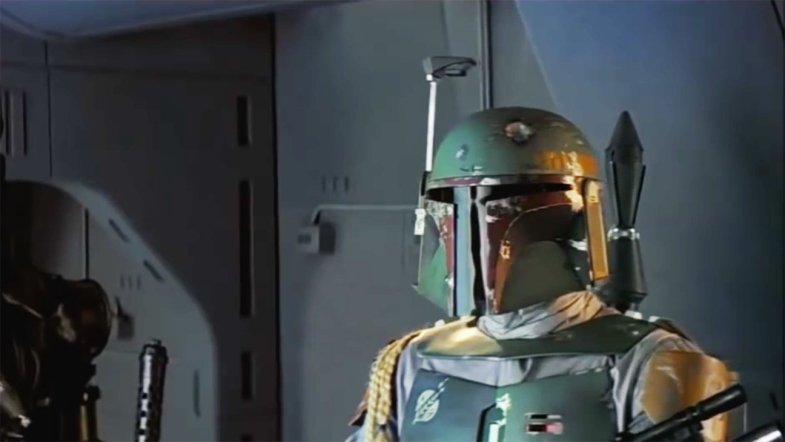 While fans know (or at least “supposedly know”) what happened to Boba Fett, one of the biggest questions that they’ve had ever since The Clone Wars premiered its final episodes on Netflix was what ended up happening to Cad Bane. To the credit of Filoni and all involved, by the time the series had ended Bane became one of the most beloved characters on the show.

A gunslinger with an especially ruthless edge, Bane has left a mark in a universe that’s lasted much longer than The Clone Wars did. So while Filoni and co. don’t quite confirm whether or not he was killed as a result of this duel with Boba, it’s certainly an interesting possibility to consider. Not only would it be a fitting end for a character who, in his simplest form is a callback to Old Westerns, but it would only further illustrate how effective a bounty hunter Boba Fett went on to become after The Clone Wars. After all, it’s not just any man who can pick a fight with Cad Bane and walk away relatively unharmed, let alone the clear winner.