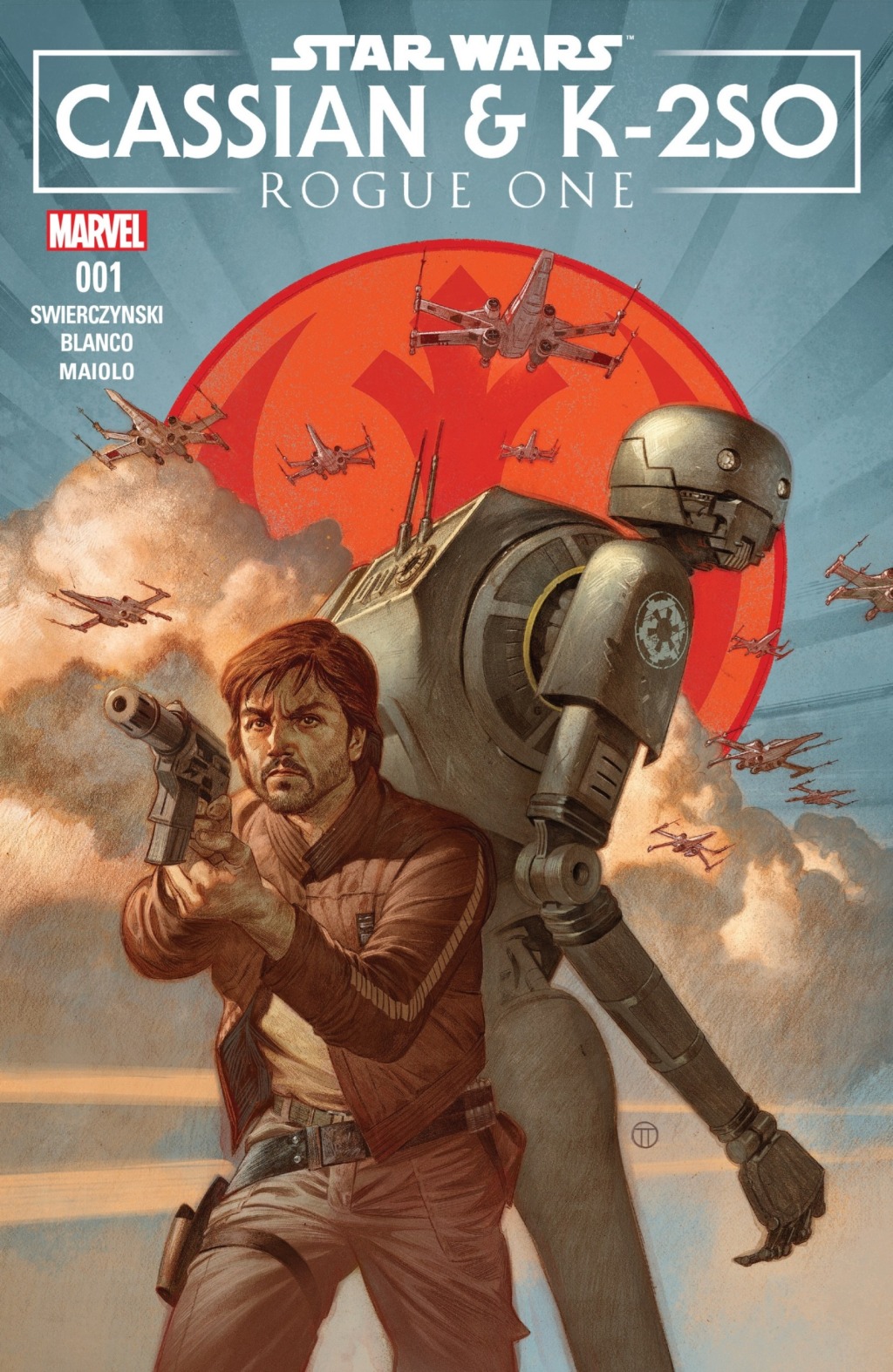 Star Wars: Rogue One—Cassian & K-2SO Special is a Marvel comic book that showed how Cassian Andor met the reprogrammed Imperial security droid K-2SO prior to the events of Rogue One: A Star Wars Story. The comic was written by Duane Swierczynski with art by Fernando Blanco and was released in August 9, 2017.

Cassian Andor is one of the top intelligence agents in the ranks of the Rebel Alliance, ably assisted by his reprogrammed Imperial security droid, K-2SO. But naturally, the two weren’t always on the same side of the Galactic Civil War. Now, for the first time, read the story of the pair’s first contentious meeting! It is very likely not to go well. 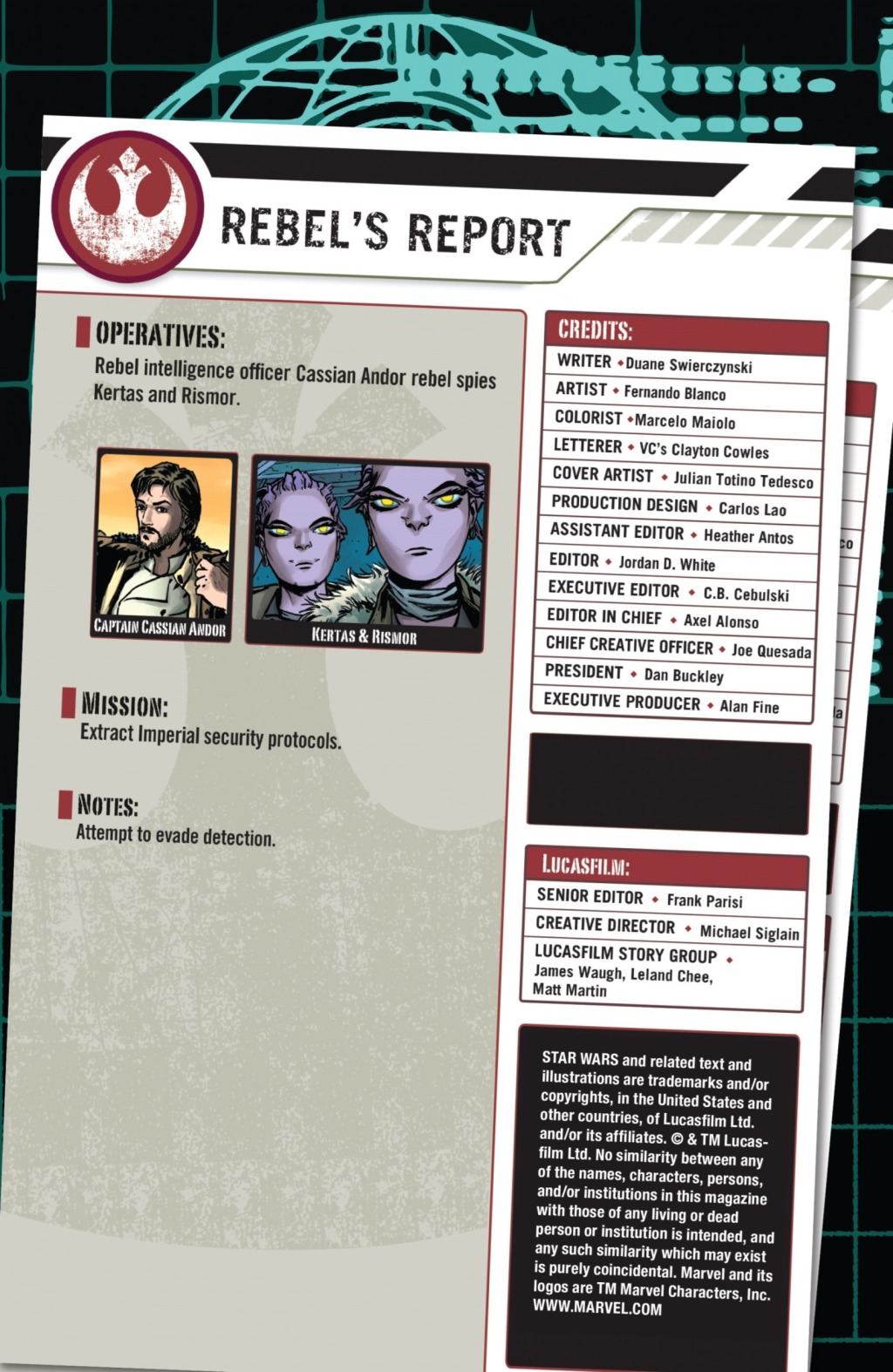 The annual begins (like the Rogue One comic adaption) with a Rebel’s Report, introducing Captain Cassian Andor and rebel spies, Kertas and Rismor. Their mission, to extract Imperial security protocols while attempting to evade detection.

The story opens with Cassian tinkering with the wiring of an unknown droid who very quickly tries to detain the Captain. We are then immediately transported to a few hours before, with Cassian flying a ship to Wecacoe, explaining to Kertas and Rismor that he doesn’t expect a large stormtrooper presence on the planet. After landing, Cassian continues to talk to the spies who never answer back as they communicate through scent. Before too long, the three spot a large Imperial force filled with stormtroopers and security droids. Refusing to be deterred, Cassian pushes on undetected until they reach a decommissioned Imperial cruiser. Cassian believes the Imperial security protocols are on the ship. Kertas and Rismor start trying to find them but Cassian quickly spots stormtroopers heading in their direction and soon an alarm is sounded. 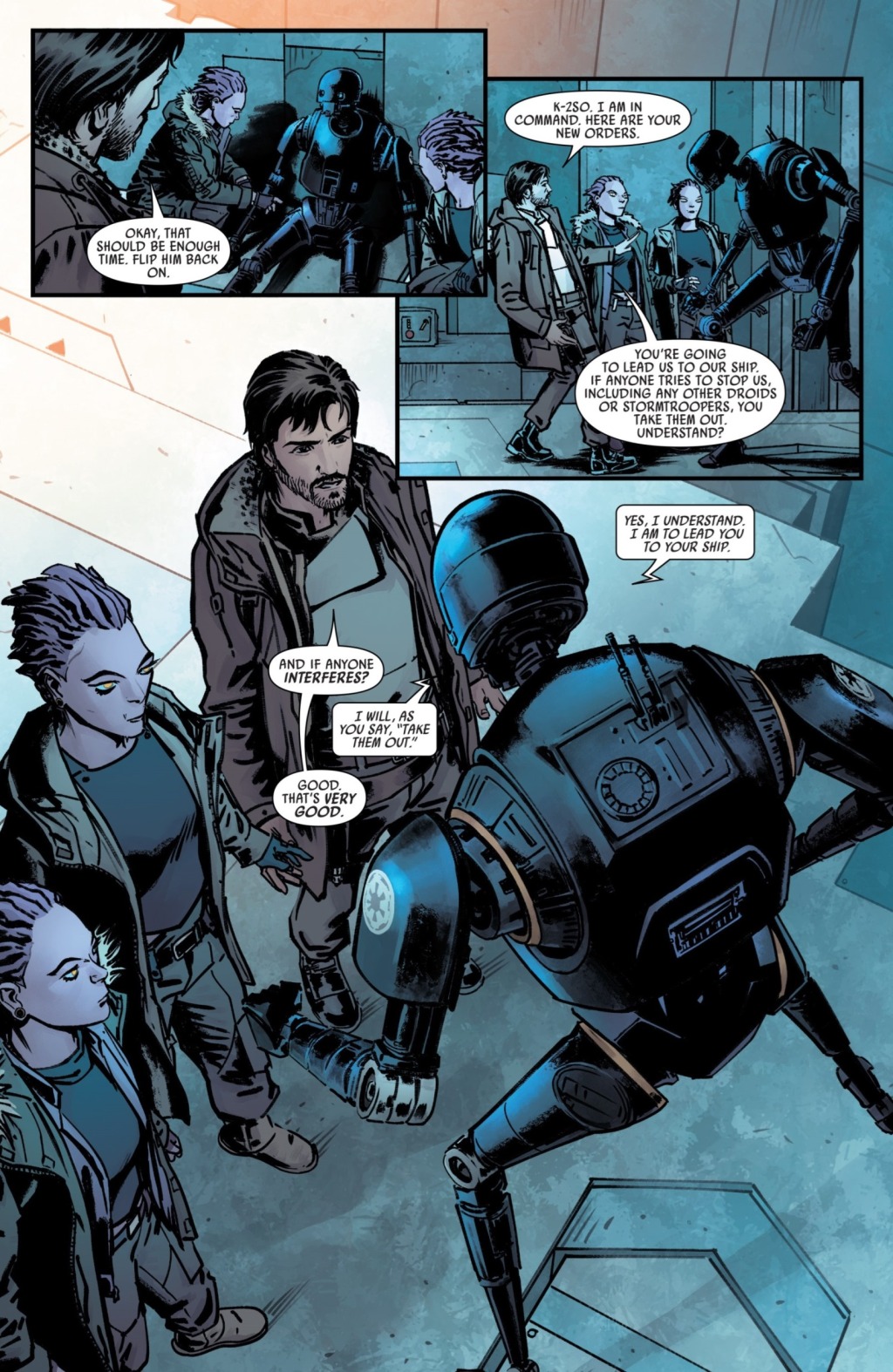 Realising they can’t escape, Cassian comes up with a plan and tells Kertas and Rismor to stay put. Getting the attention of a security droid, Cassian tries to subdue the droid, who we learn is K-2SO, but can’t find the kill switch, as this is a model he has not encountered before. With ease, K-2 is able to defeat Cassian but is thwarted by the rebel spies, who press the droid’s kill switch. The story catches up with the start of the story, with K-2 reactivated and trying to detain Cassian as only 29.73% of his memory has been erased. The kill switch is thrown again.

Switched on again, Cassian gives K-2 new orders to lead them to the Rebel’s ship and take out any troopers who try to stop them. The team make it to find their ship surrounded by stormtroopers. K-2 once again tries to detain Cassian, getting the attention of the stormtroopers. Rismor and Kertas run off, leading the stormtroopers away from Cassian and K-2 but not before telling Cassian that K-2 has the intel the Rebel’s need. 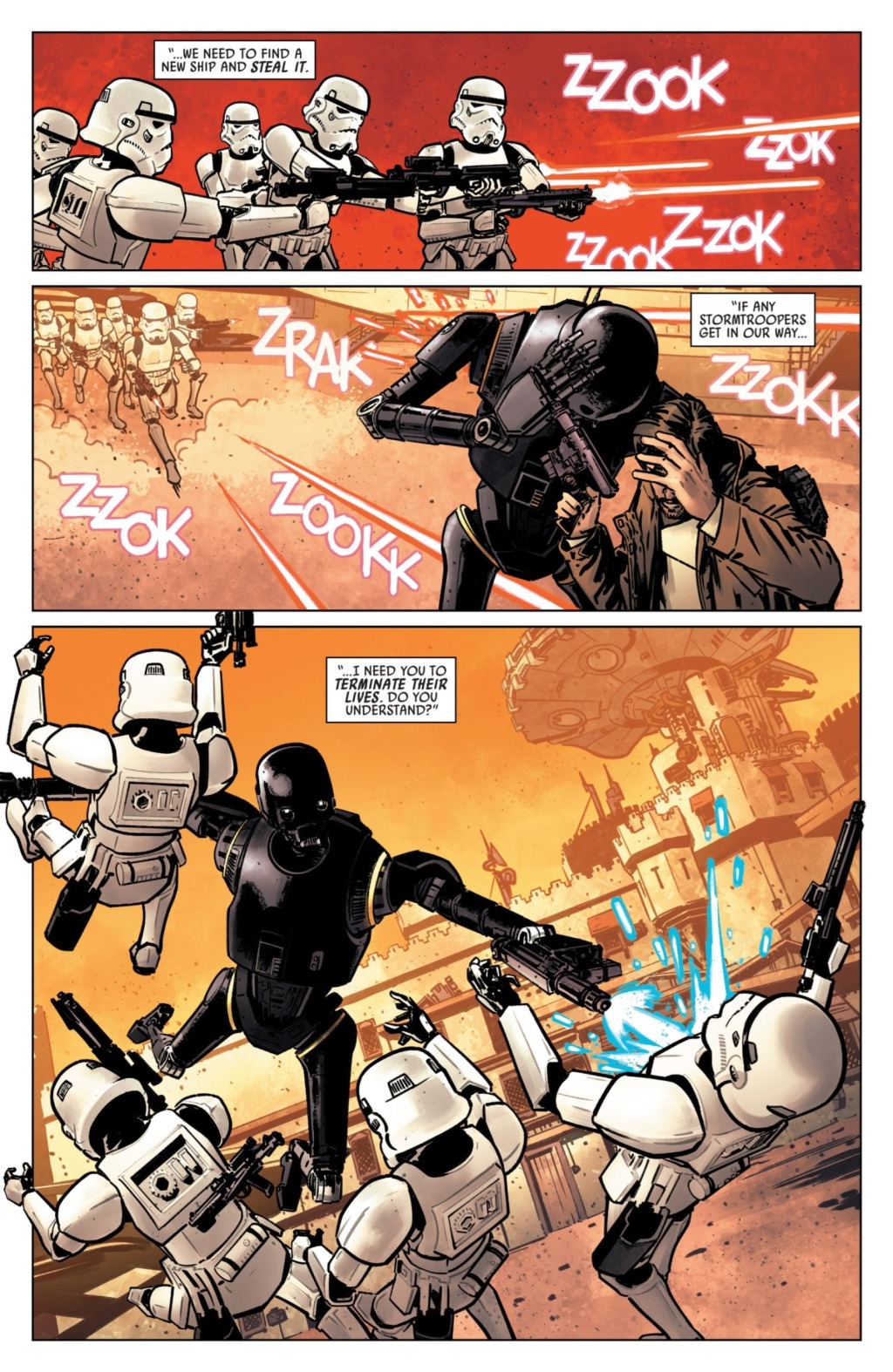 The Rebel ship suddenly blows up and so Cassian tells K-2 that they need to find a new ship. Not one to be deterred from his programming, K-2 tells Cassian that he still needs to detain him and that 8.3% of his memory is still intact. Realising his mistake, Cassian switches K-2 off again and removes the droid’s base layer of Imperial programming. Once reactivated, K-2 is suddenly the droid from Rogue One and helps Cassian to find a new ship and escape. We see that Rismor and Kertas have blended into a crowd and are safe on the planet.

Cassian & K-2SO Annual #1 is a one-shot comic from Marvel and available from all good comic stores now. Download here. Use CDDisplay app to open the file.

It’s almost time for millions of people to travel together to a galaxy far, far, away to experience another story in the world of Star Wars. This winter, Disney will release the first Star Wars film that won’t take place within the confines of the Skywalker lineage and is destined to be one of the year’s biggest movies.

Rogue One: A Star Wars Story will be the first spinoff in the Star Wars universe and director Gareth Edwards (Godzilla) is hoping to deliver a hard-hitting war film set within the lived-in universe. One character that has the looks of a fan-favorite is security robot K-2SO, brought to life via performance capture by actor Alan Tudyk (Zootopia). The droid, also known as Kaytoo, and is an Imperial droid that’s been reprogrammed to assist the Rebels in their attempts to steal the plans to the Death Star.

Ranging from R2-D2 to BB-8, there is a long history with robotic sidekicks in Star Wars lore. Visual effects supervisor John Knoll has a lifetime of experience in the world and is credited with creating the story for Rogue One. In a recent interview with EW, he explains what sets Kaytoo apart from his predecessors and went into depth about the newest droid to join the Star Wars universe:

“He’s tall, to intimidate people around him… He’s sort of anthropomorphic, in that he’s got two arms, two legs and a head, you know, et cetera… But then Kaytoo has a little bit more sinister aspect in his original design because he starts off as an Imperial enforcer droid.

It’s not the first time we’ve seen an Imperial droid…There’s the Imperial probe droid and the sort of interrogation droid that have these black shells and a kind of sinister, evil-looking character to them.”

The Imperial droids that Knoll is alluding to are the Viper droids from Empire Strikes Back that were surveying the snowy planet Hoth, in search of the insurgent Rebels. Rogue One takes place years before those events, so it makes sense within the canon how the Viper’s design could be an extension of the simpler K-2SO design.

The Viper Droid from The Empire Strikes Back that inspired K-2S0 visual.

Rogue One is assured to be a hit and a large part of that is attributed to familiarity of the production design. Aside from having the lovable charm of the Iron Giant, Kaytoo immediately feels like at home in the Star Wars universe. The same could be said of several characters such as Maz Kanata, BB-8, and Kylo Ren, before the release of The Force Awakens last year, which is a good omen for the upcoming spinoff. 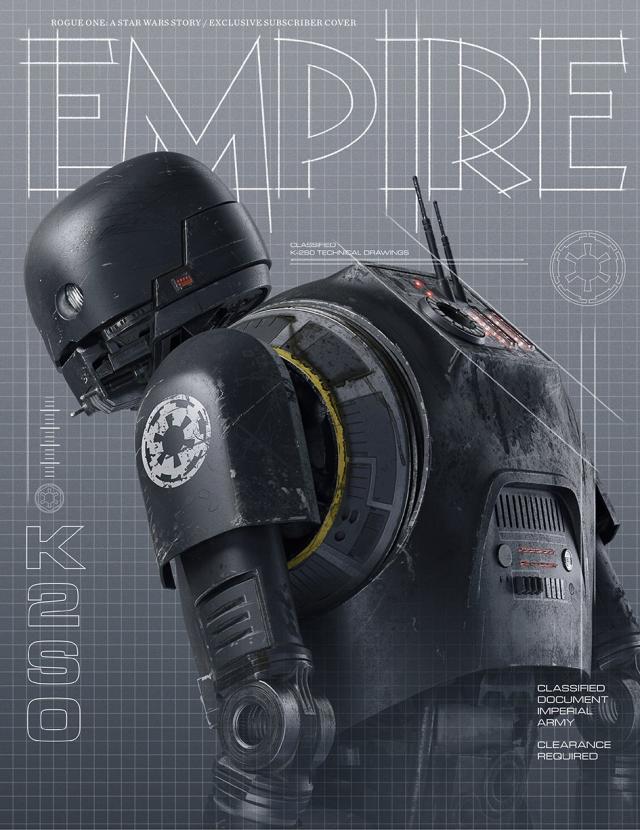 Rogue One K-2SO cover of Empire.

While he isn’t he expected to rival R2-D2 or BB-8’s popularity, Kaytoo fits into a similar mold. However, what sets him apart is his duplicitous beginnings, whereas the other droids’ loyalties were never in question. Could his hard drive be reset? Does he have sub-directives that will complicate the mission? Regardless, the character’s presence is certain to add a layer of complexity and humor that should make for another memorable December.